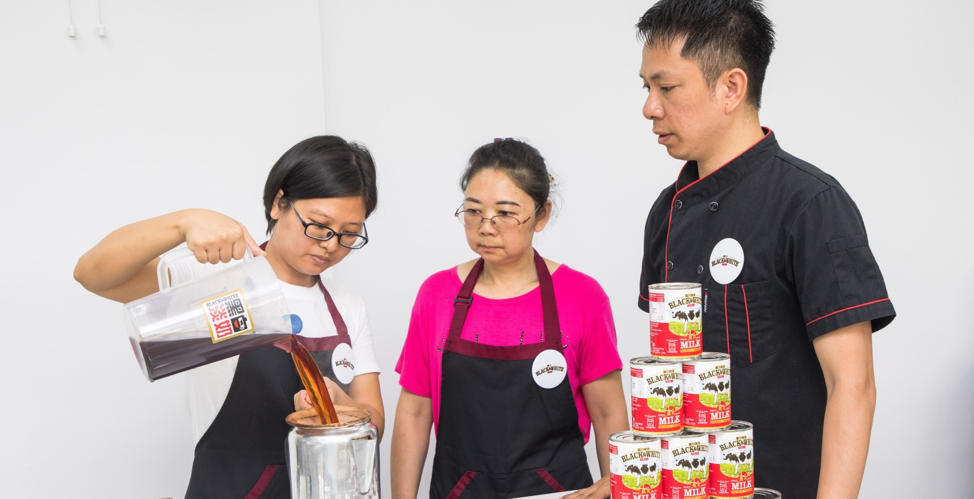 Over the past several years, FrieslandCampina (Hong Kong) Limited (“FCHK”), a subsidiary of Royal FrieslandCampina, has been taking major steps to preserve and enhance a vital aspect of Hong Kong’s culture via a series of expansive initiatives that have long-lasting, rewarding outcomes. These initiatives have helped to fulfill local dreams via new jobopportunities, boosted confidence amongst various sectors of the community and enabled cherished traditions to continue amongst a new generation, with one of the main goals being that a unique city tradition will carry on well into the future.

Cha chaan tengs, Hong Kong’s version of local cafés, have been an integral part of the city’s culture since the 1940s. Originally created as an inexpensive, filling, fast paced hybrid of local and Western cuisines, the no-frills venues are now an integral part of the city’s daily life and collective memory. They’ve also been responsible for a unique “only in Hong Kong” food culture that has evolved over generations, involving highly specialised techniques requiring training and know-how.

One of the core components of this cuisine is Hong Kong-style milk tea, which has been recognised as one of the20 items that are officially on the first ever Representative List of Intangible Cultural Heritage of Hong Kong. A twist on British tea drinking traditions, the style that began in the 1940s is made from a mixture of different black teas using methods that vary at different cha chaan tengs.

But it’s usually always mixed with one kind of evaporated milk: BLACK & WHITE®, the ubiquitous,nearly 80-year-old FrieslandCampina brand made of 100% fresh milk from the Netherlands. According to the South China Morning Post, it’s estimated that at one citywide cha chaan teng chain alone, more than 10,000 cups of Hong Kong-style milk tea are made daily.

Yet due to a variety of factors, cha chaan teng culture and traditions have been on the decline over the last several years. These reasons include a lack of formal on-the-job training programme at many venues. Such venues offer specialised cuisine and techniques that elder generations aren’t able to pass to a new generation due to a lack of time, resources and impending retirement. There’s also the realistic, everyday aspect of the cafés’ relentless, bustling pace, which prevents potential new hires from being taken into the fold.

And, in the case of Hong Kong-style milk tea itself, the drink requires special training — similar to a good barista at a coffee shop — in order to create a satisfying drink for customers which is unique to Hong Kong. All of the above means that dedicated time and training is needed so that would-be employees are able to handle the daily aspects of the job with speed, competence and know-how. Without a formal succession programme, this is rarely happening today.

As a result, there have been fears that the traditions and techniques used to prepare such foods — especially Hong Kong-style milk tea — will be lost. In a bid to preserve what can be recognised as a highly specialised art form, FCHK has embarked on a series of initiatives.

The programme was started in 2016 to prevent the technique from dying out and in order to bring new, qualified talent to the industry. In 2018, nearly 30 unemployed Hong Kong citizens (aged 18-59) each received 35 hours’ worth of training that involved bar operations, food safety and techniques. 75 percent of those who took part were then offered a 150 hour internship at a real cha chaan teng where they could receive much needed, fast-paced restaurant experience.

In an extension of the programme to pass on this culture and craftsmanship to the next generation, 20 students from a local secondary school were also selected to formally learn about Hong Kong-style milk tea making techniques and career skills in conjunction with the Youth Career Development Service of ELCSS-HK. The owner of Chrisly Café also provided entrepreneurial advice to students.

At the end of their training, the students were able to put their new knowledge to use via BLACK & WHITE®Milkteafé, a ten day pop-up store held by the company in celebration of the 6thMilk Tea Day at Causeway Bay in November 2018.  Two teams of students competed to sell the most BLACK & WHITE®combo sets over the course of a weekend. This provided them with much needed entrepreneurial and specialised Hong Kong-style milk tea training, and most importantly, enriched their lives with the opportunity to explore their interests and career aspirations. All proceeds from the event benefitted elderly service development to acknowledge the elderly’s contributions to society.

First, the training programme has equipped the needy and unemployed with vocational skills to rejoin the job market. The selected trainees themselves were offered a salary and letters of employment after completing their internship. Three of the interns were subsequently offered full time employment at the cha chaan tengs that they interned with. To date, FCHK has trained nearly 150 professional Hong Kong-style milk tea masters.

All students, meanwhile, gained real life entrepreneurial skills as two teams competed against one another in terms of selling BLACK & WHITE®combos that included Hong Kong-style milk tea made on-site. One student claimed that “the biggest challenge in making milk tea was time management and this programme gave me a practical opportunity to face society.” One intern who graduated mentioned that the programme “allowed me to fulfill my dream,” while others were grateful for both the opportunities presented and the recognition that they now have a “commitment to pass on this intangible cultural heritage of Hong Kong to the next generation.”

That commitment to pass on this valuable cultural heritage may ultimately offer the biggest benefits for both Hong Kong and FCHK. With so many older milk tea “masters” retiring, the skills acquired by ongoing new trainees will enable the cha chaan tengs — and their traditions — to continue well into the future. It also ensures that it’s being done the right way, both in terms of food safety and knowledge about how the business aspects of such venues work. 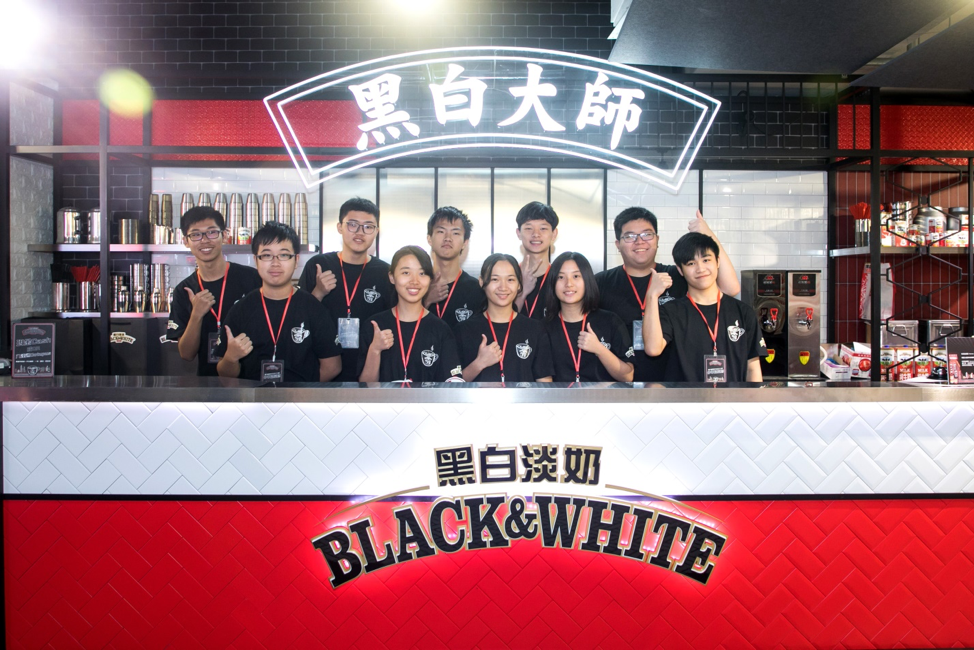 As newcomers learn that the fragrance, texture and effect of the brand’s use makes for a better Hong Kong-style milk tea, the company is also creating the impression that its high quality is associated with good food service. In doing so, BLACK & WHITE®becomes thebrand to use at public venues and in the home. Associated promotions, such as the internship programme and an annual public “Hong Kong Milk Tea Day”, help make BLACK & WHITE®evaporated milk the premiere must-have item in the category.

By supporting its customers and building capacity in the ecosystem – considered to be a cluster development approach, in shared value terms – demand for the BLACK & WHITE®products is perpetuated. Instead of moving only through traditional channels via wholesalers and distributors, this Training Programme creates and builds vital business-to-consumer relationships that extend to public cafés, such as cha chaan tengs and ultimately, daily consumers. As a result, brand recognition increases even more, and that recognition becomes associated with quality. Once that association has been made, customer loyalty — as seen by the recent Nielsen report — ensues.

While brand loyalty has been one result, regional public recognition has been another. Recently, FrieslandCampina Hong Kong was named the winner of two awards at the 10th Asia Responsible Enterprise Awards, which honours Asian businesses for championing responsible and sustainable business practices. This included an award for “Social Empowerment”, as the company was selected from amongst 200 entrants across 14 countries.

As FCHK is clearly seeing a relationship between its public programmes, its community engagement and ensuing results, their initiatives are expected to broaden and continue well into the future. What started as an initiative to help a sector of the community, has enabled a company to see lasting, sustainable results. “Moving forward, we will keep our commitment on nourishing the lives of Hong Kong people across all ages,” says Natalie Yuen, Associate Director, Corporate Affairs of FrieslandCampina Hong Kong.

That commitment has actually proved to be more than nourishing. In the case of the New Generation Milk Tea Master Training Programme, it’s also offering much needed work to those who need it, educating future young employees about entrepreneurial skills and helping to ensure that an important aspect of Hong Kong society – in this case unique cha chaan tengs – thrives well into the future. That’s good for Hong Kong, and it’s proven to be extremely beneficial for FCHK.