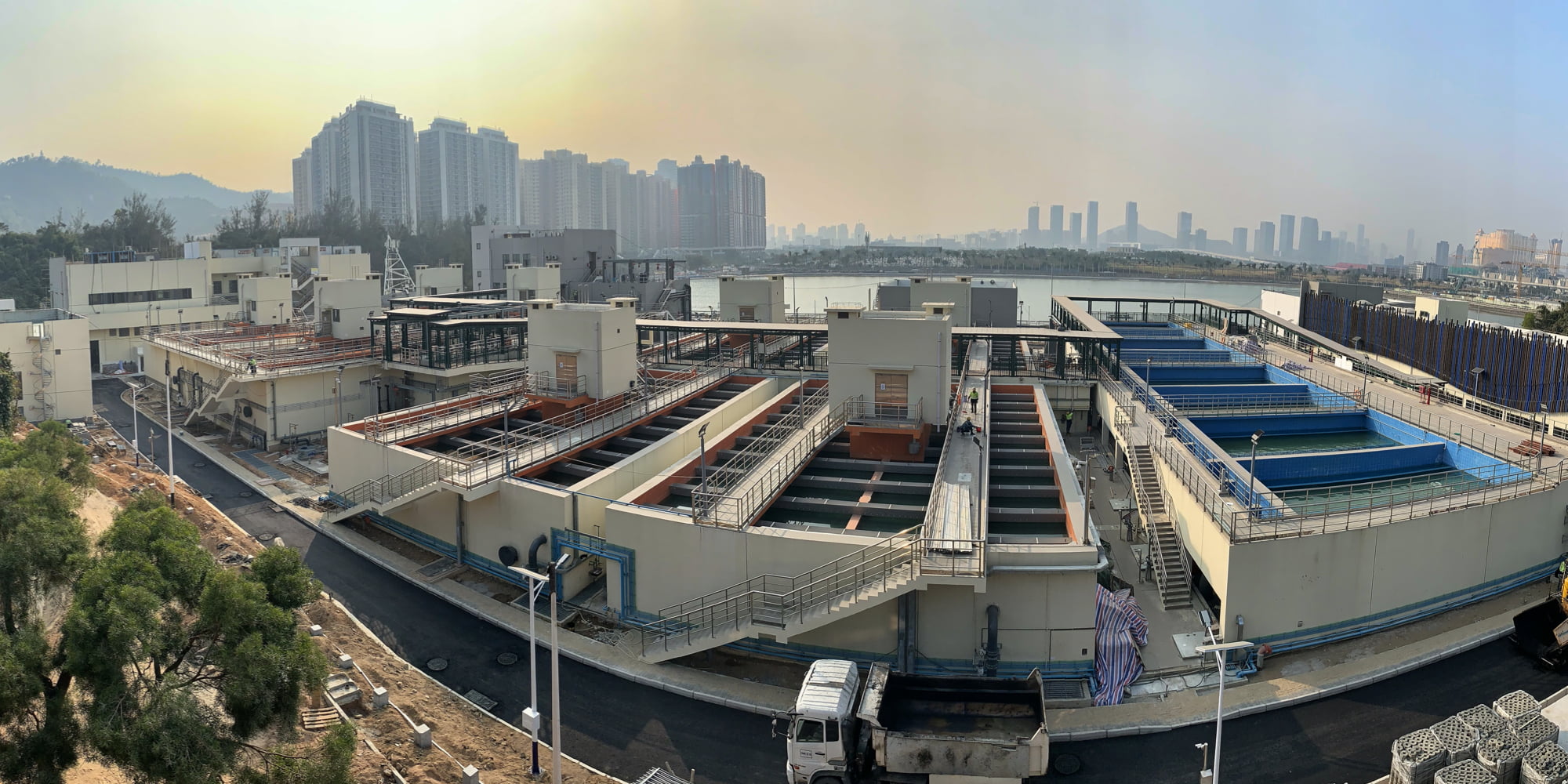 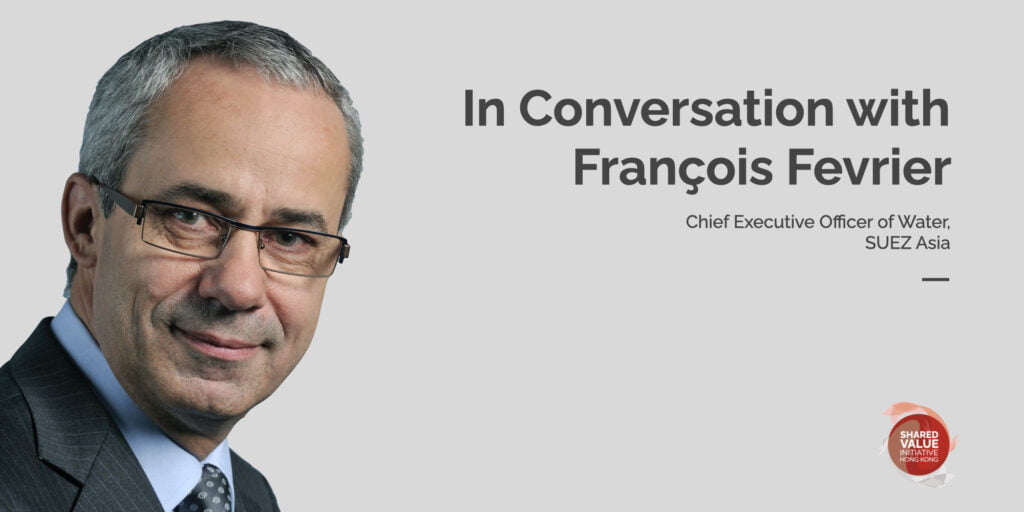 As water scarcity is one of the most important environmental concerns in Macau, François Fevrier, CEO of  Water in SUEZ Asia, tells how their subsidiary Macao Water has helped save 2 million m3 of water. Let’s discover the benchmark of performance excellence in China’s water industry.

Could you give an overview of Macao Water?

Our services began with a 25-year concession contract of public water supply with the then Macau-Portuguese Government in 1985, and now operates under a renewed concession that goes on until 2030. It is SUEZ’s first Public-Private Partnership (PPP) project in Asia, and the sole operator in Macau offering drinking water production, distribution, and customer services. 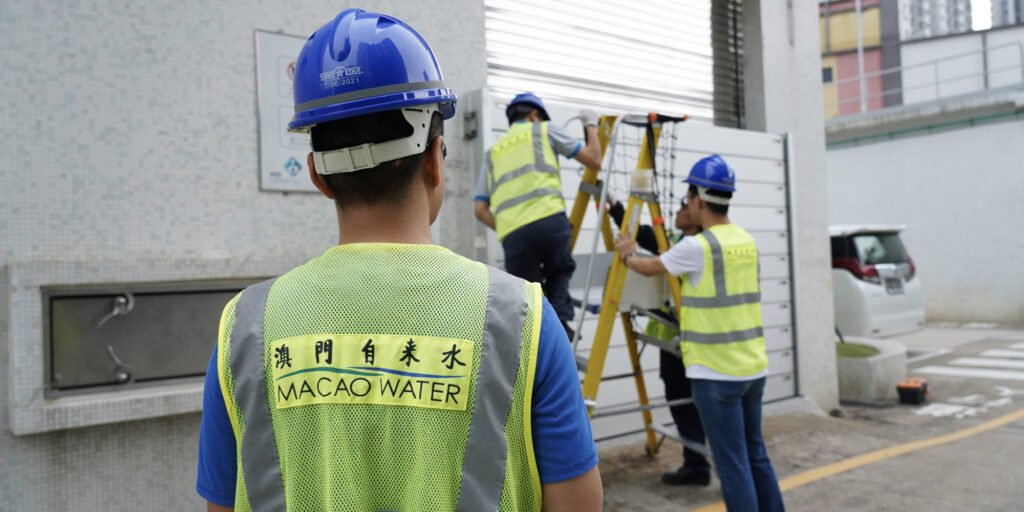 What are the environmental issues SUEZ tackle with Macao Water?

With a population of 650,000 inhabitants, Macau is one of the world’s most densely populated areas. Along with the prosperity of Macau’s tourism and gaming industries, the region, with an area of only 32.9 km², receives nearly twice as many visitors a day as its resident population, following which is a rapidly growing demand for water.

Freshwater resources are also scarce in Macao because it is a peninsula surrounded by sea with no rivers. There are only very few facilities for raw water storage and about 96% of raw water is from Zhuhai. In addition, its location at the Pearl River Estuary also makes it vulnerable to the threat of saline intrusion. It is of paramount importance to conserve freshwater resources while ensuring the quality and safety of the water supply for the city.

What solutions have been implemented to preserve water?

The Macao SAR Government is working on its smart city vision to lead on digital technology and serve the people through intelligence. Smart water is an important pillar supporting this vision. At SUEZ, we have been implementing them in our daily activities to help to improve water use for both municipal and industrial users, and also to optimize flood management in case of extreme water events. The key role of such solutions is to optimize the efficiency, resilience and sustainability of facilities and networks.

To further improve Macao Water’s efficiency, we have installed many of SUEZ’s smart solutions including Smart Water Networks and Smart Energy. They have significantly reduced its non-revenue water rate from 18.1% in 1985 to 7.7% in 2021, which is far lower than the average in Asia as well as enabling energy saving of 4% per year, with pump efficiency reaching 80%. Since then, the AQUADVANCED® smart solutions have been applied widely across Greater China, including Shanghai, Chongqing, and Hong Kong.

Additionally, the new Seac Pai Van water purification plant is an energy-efficient green plant that is aimed at tackling the growing population and limited access to fresh water for the next decade. Seac Pai Van Water Treatment Plant, which is currently under trial run, adopts a green plant construction concept, allowing the facility to fully integrate into Seac Pai Van Reservoir landscape. It has received numerous accolades for the planted roofs and walls introduced, as well as soundproof measures to make the plant compatible with surrounding communities. Natural ventilation and daylighting are important elements in the plant’s buildings, which help to reduce energy use.

Reclaimed water is used for planting, road cleaning and toilet flushing in the plant to save fresh water. The green design facilitates the plant to be a garden-like waterworks with the first Green Building certification of its kind in Macau. The plant has become the demonstration base for public education in water treatment and conservation. 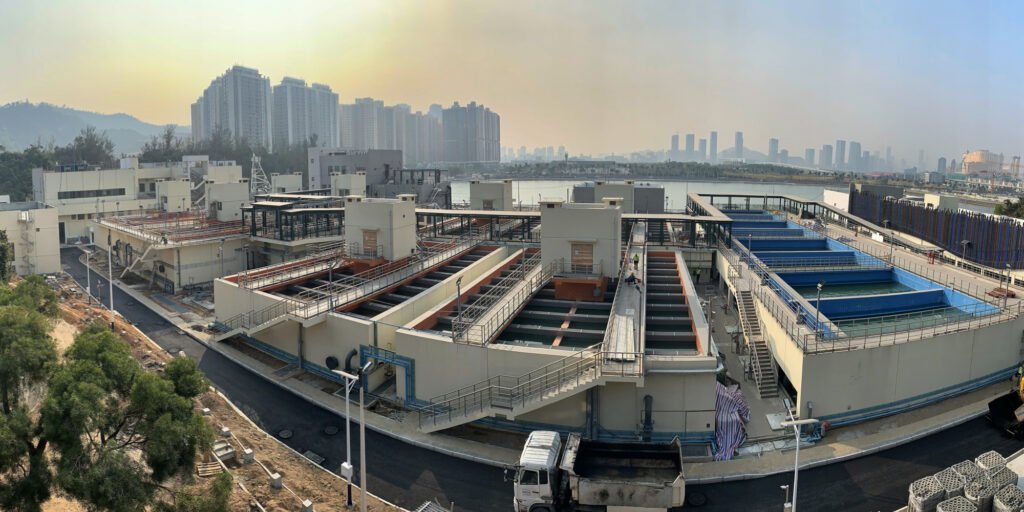 What environmental results has SUEZ achieved so far?

Through fully integrating the smart AQUADVANCED® digital suite, Macao Water has helped preserve limited water resources, especially on non-revenue water, which represents up to 30% of the total volume of drinking water produced globally. Since adopting a smart water system, Macao Water has helped save 2 million m3 of water, which is equivalent to the water consumption volume of 3,165 households. This creates Shared Value for the company, customers, and the environment to save precious water resources and energy consumption while improving operational efficiency and financial performance. 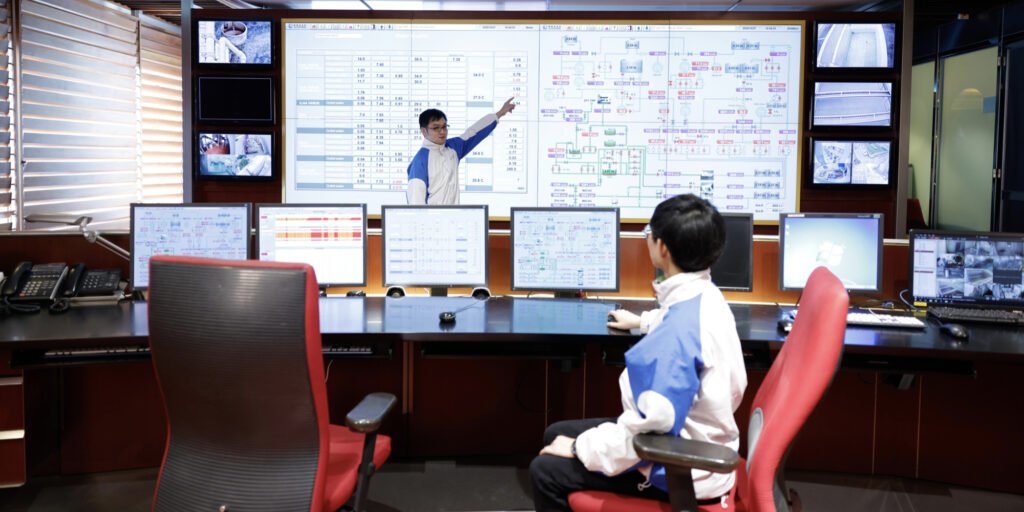 The AQUADVANCED® smart solutions have been applied widely across Greater China, including Shanghai, Chongqing, and Hong Kong. Photo credit: SUEZ

Does SUEZ have also an impact on society in Macau?

We believe supplying water to the city is not merely about service, but also a commitment to the local community.

Macao Water has been a long-time recipient of numerous accolades, such as the Most Socially Responsible Water Company in China, the Outstanding Corporate Volunteer on International Volunteer Day, and the Best Family-Friendly Employer. In addition, we have launched a variety of public welfare activities to help citizens build good habits of water use so that they would contribute to saving Macau’s precious water resources. Through its efforts, Macao Water has worked diligently to influence others to join its actions in environmental protection.

Recently, SUEZ and Macao Water have also signed a cooperation framework with the University of Macao. Under the framework, the three sides will combine their resources and strengths in scientific research and marine ecosystem conservation, establish an ambitious joint research platform to carry out innovative research in offshore ecosystem and water treatment technology, and join hands to protect the marine environment and enrich marine biodiversity.

With a strong presence of 60+ years in Southeast Asia and 45+ years in China, SUEZ is a preferred partner in helping authorities and industrial clients develop management solutions that enable cities and industries to optimize their resource management and strengthen their environmental and economic performances. Today, SUEZ is recognized as one of the most influential companies and a service benchmark in leading the region’s environmental industry. SUEZ’s smart and resilient water solutions have also been applied widely across Greater China.

Additionally, thanks to Macao Water’s operational and managerial excellence, not only has the Group successfully renewed its contract for another 20 years in 2010, but we also set the standard for China’s water industry while continuing to contribute to Macao’s prosperity. 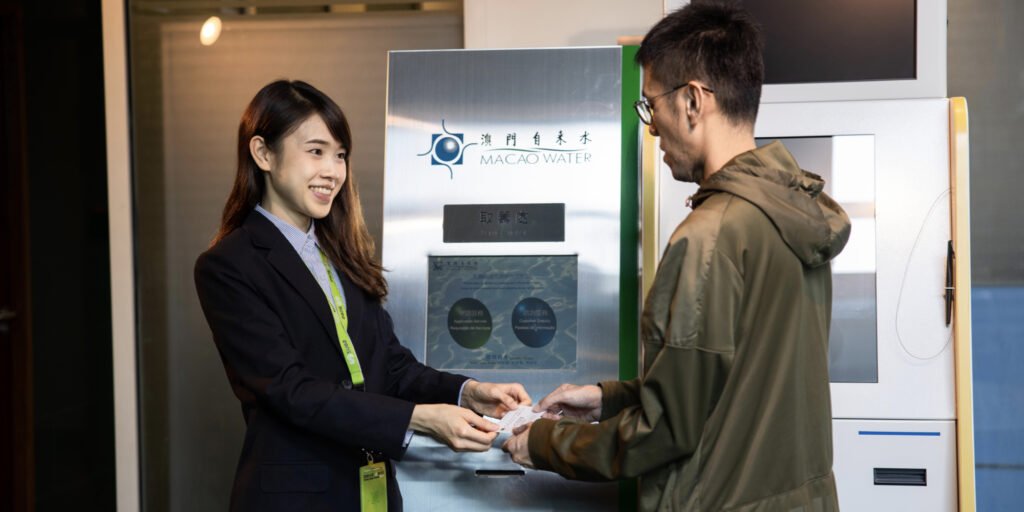 What are the next steps?

Upon the completion of the Seac Pai Van water purification plant, Macau’s combined water supply capacity will increase from 390,000 m3/day to 520,000 m3/day to meet Macau’s growing demand for the next decade. The facility is positioned as a water purification plant with a reduced energy and emissions profile.
Looking ahead, we will continue to provide Macau citizens with safe, reliable and quality water supply and services while attaining the most efficient utilization of water resources in line with a clear sustainable development strategy.

On top of that, through Macao Water, we support building a sustainable environment for the Greater Bay Area by forging technical exchanges and collaboration within the water industry for our stakeholders and the community at large. 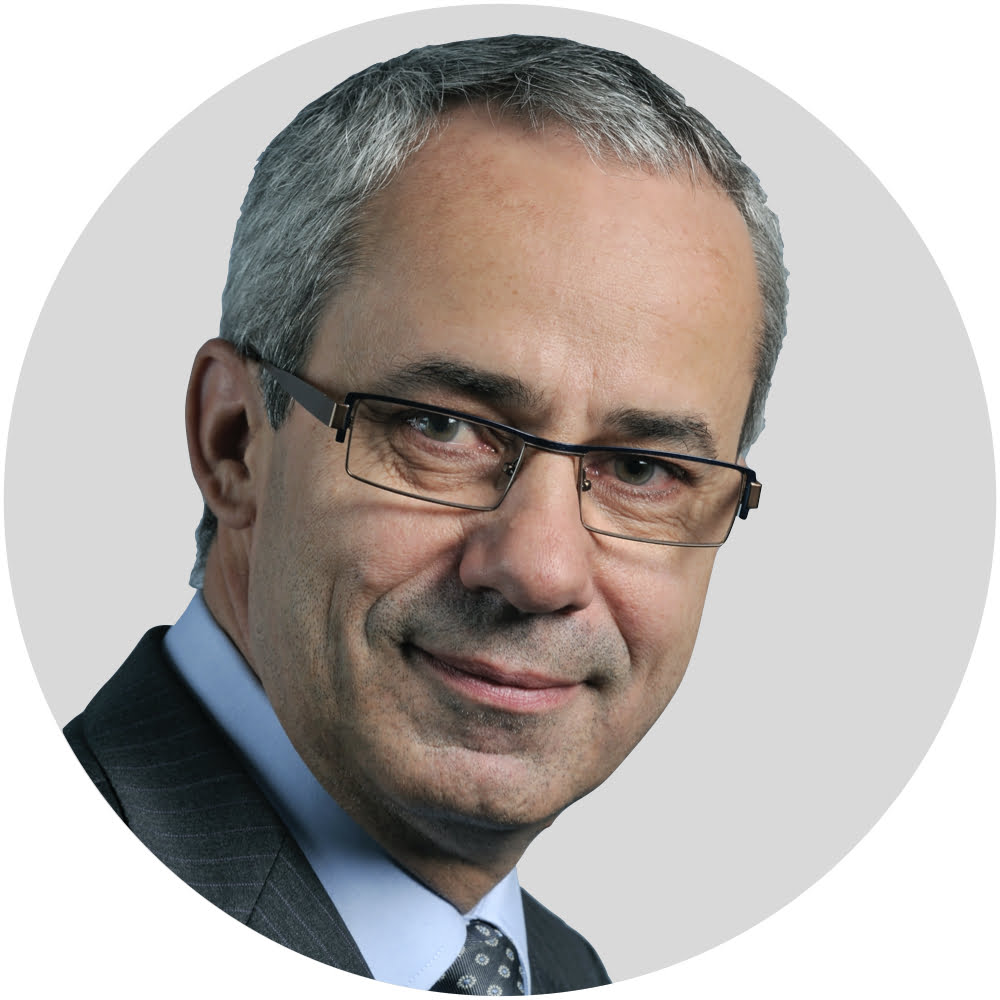 François Fevrier has been appointed CEO of Water in SUEZ Asia since July 2015. He joined SUEZ in 1989 and has previously held several executive positions across Europe, the Middle East and APAC.